Beyond English: Why educational institutions should expand language teaching

In a previous post, we have examined the positive impact that the implementation of multilingualism policies has on national economies and societies. We want to focus our attention once more on the relevance of investing in language education, especially in the face of deep societal changes. In fact, demographic developments and the fast growth of emerging markets calls for schools and universities to update their language curricula, in order to help their students to understand and navigate an increasingly multipolar world.

Language learning and the growing of globalization

Contemporary globalization has undeniably found in English its lingua franca. Already in the 1990s, language studies stressed that English had become the preferred language used by people with different mother tongues and cultures to communicate with each other.

The English language built its international reputation and role in a time when the center of the global economic, political and cultural power actually resided within the Euro-Atlantic region. This was in fact the configuration of the international system up to the early 2000s.

Today, however, the balance of power has changed and the multipolar system in which we live sees countries such as China and India playing an increasingly decisive role in international decision-making processes together with the United States and Europe.

Social and political transformations bring along cultural changes, which should also be considered in the area of language education.

The evolving demand in foreign languages

It is important to put this transformation into context. English is and will remain a key language in business, trade and research. The mere fact that 949 million internet users currently use English as their primary language suggests that this language will retain a prominent global dimension.

Nonetheless, the evolution of global demography is changing not only the size but also the composition of the world's population. As highlighted by a United Nations’ report (cfr. Table 1):

“The new population projections indicate that nine countries will make up more than half the projected growth of the global population between now and 2050: India, Nigeria, Pakistan, the Democratic Republic of the Congo, Ethiopia, the United Republic of Tanzania, Indonesia, Egypt and the United States of America (in descending order of the expected increase). Around 2027, India is projected to overtake China as the world’s most populous country.” 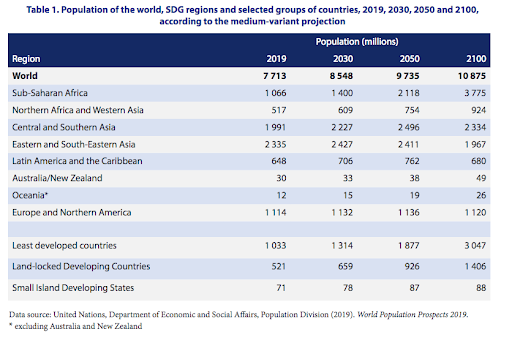 As new countries enter the global arena, the limitations of a language education based on the prominence of the English language become more evident.

As a matter of fact, the British have been among the first to underline the need for encouraging students to gain multilingualism competence. The British Council’s document Languages for the Future defined a set of parameters (e.i. current export volume, diplomatic and security priorities, public tourism relations etc.) aimed at identifying the most relevant countries for Britain’s strategic interests.

As a result, the British Council concluded that the top 10 foreign languages that should be given priority in national language education courses should be: Spanish, Arabic,  French, Mandarin Chinese, German, Portuguese, Italian, Russian, Turkish and Japanese.

The Covid-19 pandemic has reinforced the belief among the British academic establishment that there is a need to steer national language study pathways toward a multilingual trajectory. As the "International Call to Action: The Importance of Languages in Global Context” issued by the British Academy among other, argues:

“The challenge of providing education in multiple languages has proven especially complicated in primarily Anglophone nations [...] Today, Anglophone Communities in particular are not producing enough speakers of languages other than English to meet 21st-century needs.”

Looking at the available data regarding the languages spoken in the emerging economies with the highest growth rates (cfr. Table 2), it seems evident that the future of language education belongs decisively to the countries of the Global South. 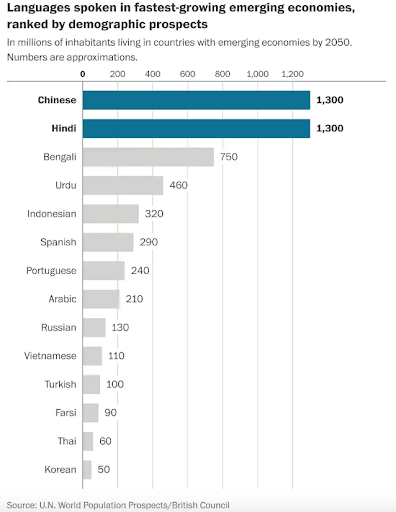 In any case, internal and external shocks can quickly transform growth forecasts. Thus, the implementation of multilingualism educational courses should not be pursued solely in light of market growth projections. Instead, multilingualism should be considered a necessary measure in order to help students to develop global competences.

Developing countries are emerging as increasingly dynamic players on the international stage, and it is likely that today's students will have many more opportunities to engage with their cultures, and their languages.

Consequently, although English will not lose its role as an international language, it will presumably have to share it with other idioms. Offering multilingual language courses will increase students' competitive advantage in the long term, giving them the ability to navigate in, and ripe the benefits of, an increasingly dynamic international environment.

In conclusion, educational institutions should be aware of the shifts in political and economic trends and innovate their language curricula accordingly, in order to adjust them to the next level of multilingualism.

Expanding the offer of language courses, therefore, can be a strategy to increase the professional opportunities of students and, at the same time, strengthen the international standing of educational institutions. On the other hand, a rich educational offer in foreign languages is an effective tool to help the integration of students from ethnic or linguistic minorities within society.